zzkt: A strange phenomenon has emerged near Amazon.com Inc. ... 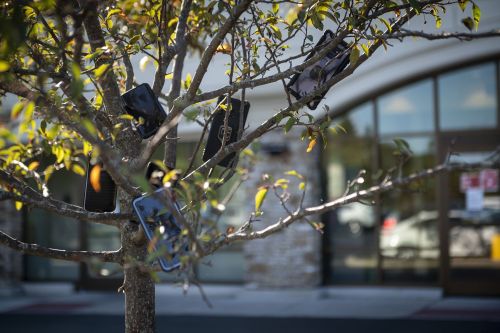 A strange phenomenon has emerged near Amazon.com Inc. delivery stations and Whole Foods stores in the Chicago suburbs: smartphones dangling from trees. Contract delivery drivers are putting them there to get a jump on rivals seeking orders, according to people familiar with the matter.

Drivers are competing for fast-delivery Instant Offers, which require an immediate response and typically take between 15 and 45 minutes to complete. Instant Offers are dispatched by an automated system that detects which drivers are nearby through their smartphones. When drivers see an Instant Offer, they have only a few minutes to accept the delivery or lose it to someone else.

The system can detect a smartphone’s location to within about 20 feet. That means a phone in a tree outside Whole Foods’ door would get the delivery offer even before drivers sitting in their cars just a block away.

The phones in trees seem to serve as master devices that dispatch routes to multiple nearby drivers in on the plot, according to drivers who have observed the process. They believe an unidentified person or entity is acting as an intermediary between Amazon and the drivers and charging drivers to secure more routes.

“Amazon knows about it,” the driver said, “but does nothing.”