Over the last year I have walked many routes in and near London, but I never really wrote about that. I'm planning to change that this year, and have already started that resolution with the England Coast Path.

This time, I will have the story of the Hillingdon Trail, from Cranford to Harefield (with extension to Rickmansworth), that I walked on February 12th, 2022.

The trail starts at Cranford Park, near Hayes and Harlington. I arrived in Hayes and Harlington by tube and train, and after a 20 minute walk I arrived at the trail head, where a priest and some other people were preparing to host a wedding at St. Dunstan's Church. I did not hang around, as I had some walking to do.

The trail follows the LOOP for a little while until it meets the Grand Union Canal. I know the canal well, as I walk alongside it often on my daily lunch time walk, but also because I walked the length of it last year all the way to Birmingham.

The Paddington Arm starts at Bulls Bridge, and this is where the Hillingdon Trail continues. 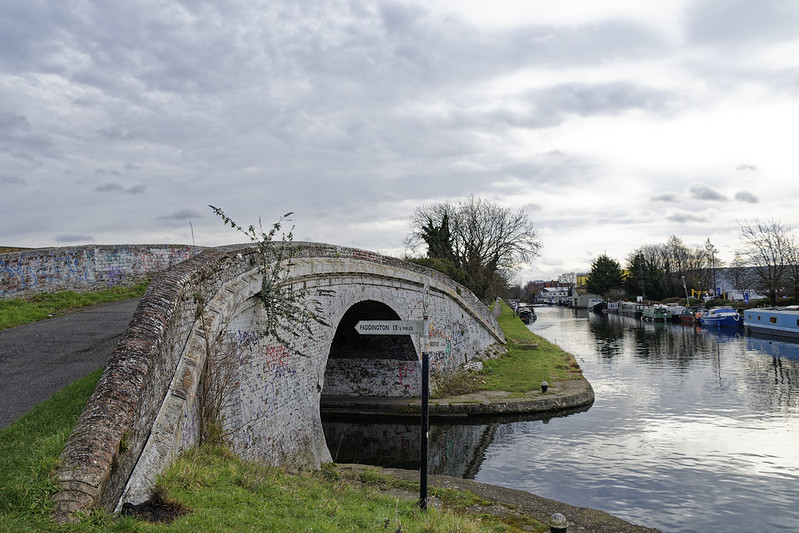 After about 2½ km the walk leaves the canal and starts following Yeading Brook, which it will do for a significant part of its length. There are quite a few open spaces around here near Yeading Brook Meadows, but the ground was fairly spongy. I was happy that I was wearing my walking shoes, instead of just normal trainers. After more of this, and passing through Michael Frost Park, and besides Michael Frost Pond, the route took me past through some woods, with a lot of few stiles. Although not all of them were framed as nicely as these, and one of them was hardly wide enough for me to squeeze through. I'm going to report that one. 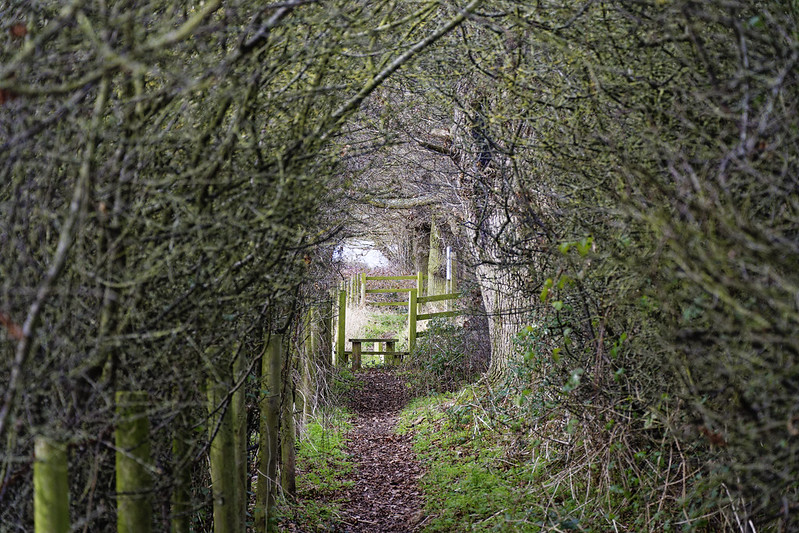 Stile at the End of the Tunnel

I recently acquired a new Nikon 18-300mm lens which I was trying out for the first time in the field on this trip, and did allow me to take shots like this. I will certainly have to play more with this to get the best out of it. Let's call it a learning experience.

Parts of this section of the trail were also very muddy, and I was happy to see that some effort was made to prevent walkers from sinking into it by providing this nice wooden walkway. 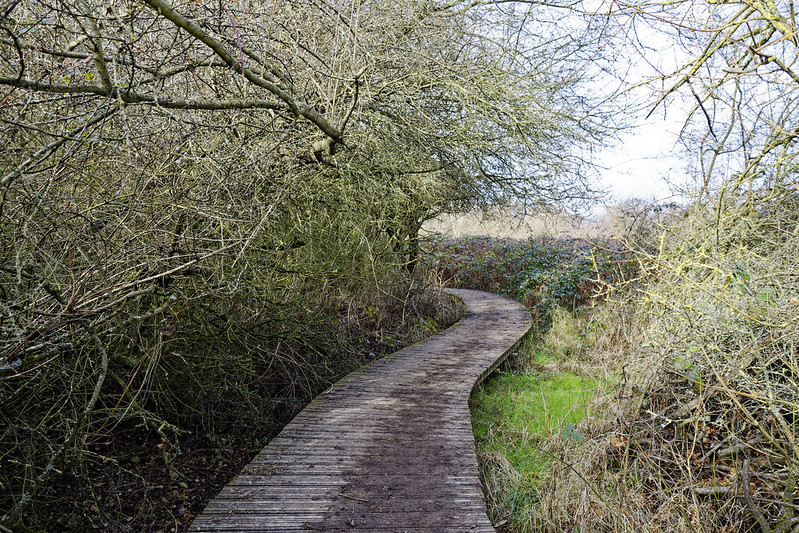 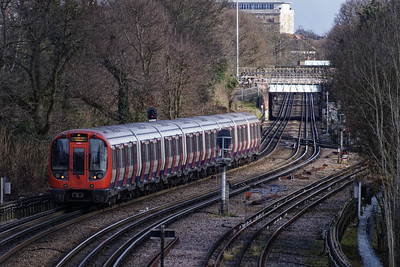 Not far after this I crossed under the busy A40 "Western Avenue", which was not as conspicuous as I feared. The walk continued for a little stretch along the Yeading Brook, but it soon switched to the Ickenham Stream. It had occasional muddy sections, but eventually turned into a metalled road which led me across the Metropolitan Line.

Near Ruislip the trail was diverted due to the construction of HS2. It was not very well signposted, but luckily I had checked the map and did not make a silly de-tour that would have required me to back track. Instead of continuing to follow the small and pleasant Ickenham Brook you cross a golf course. I walked along the wrong side of a hedge and stream here, as I hadn't noticed the path (Clack Lane) that I was supposed to follow. I would have gotten to the same spot, but I am always a bit of a stickler of following the actual signposted route, so reversed a little to follow it.

Beyond Ruislip Lido the trail meanders through the Ruislip Woods Nature Reserve, with great names such as Copse Wood, and Mad Bess Wood. The trees were still bare, but that made for an excellent contrasting photo. 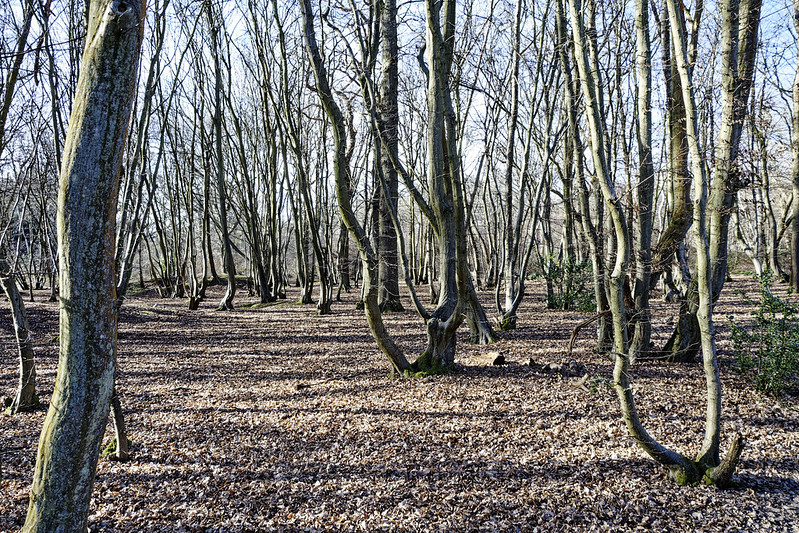 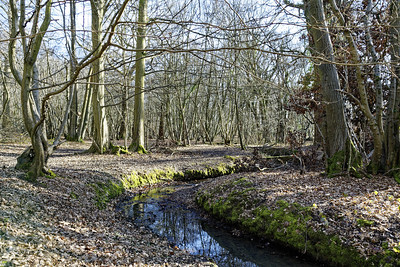 The Start of Spring

Besides the black and white trees, there were also some minor streams where plants were trying to poke through announcing the start of Spring.

From here it is a climb into the village of Harefield, and then down again. While descending from the hill, the Sun was very brightly reflecting on Broadwater Lake, between the Grand Union Canal and the river Colne.

On the way down I also spotted a good friend further up the hill, the Old Orchard pub, where many years ago we in interrupted section 12 to enjoy some ciders in their sunny garden. But I digress. 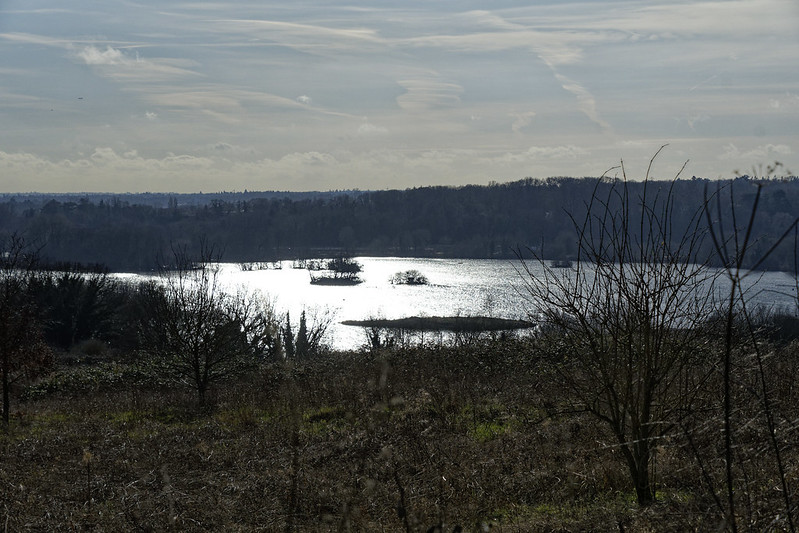 Instead of going through Harefield, the Hillingdon Trail instead descends to follow the canal for a while, where a Red Kite was on the hunt. It doesn't follow it for very long, and just before Copper Mill lock, the trail again goes up through Park Wood, north of Harefield. That meant a climb but it was worth the effort with great views and quite bird song in the woods. 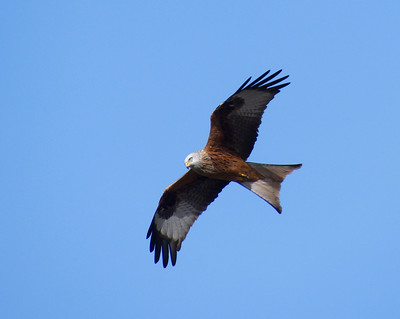 From the top it was a slower decent back to the Grand Union Canal at Springwell Lock where the trail's end is.

I still had to go home and instead of walking back up the hill to Harewood and get an hourly bus and a tube, I continued walking towards Rickmansworth along the canal. It was a beautiful day, and from Rickmansworth it would be much faster to get home anyway.

Between the end of the trail, and the ponds of Rickmansworth Aquadrome there is an old factory on the other side of the canal, with some stuffed toys hanging from supporting beams. 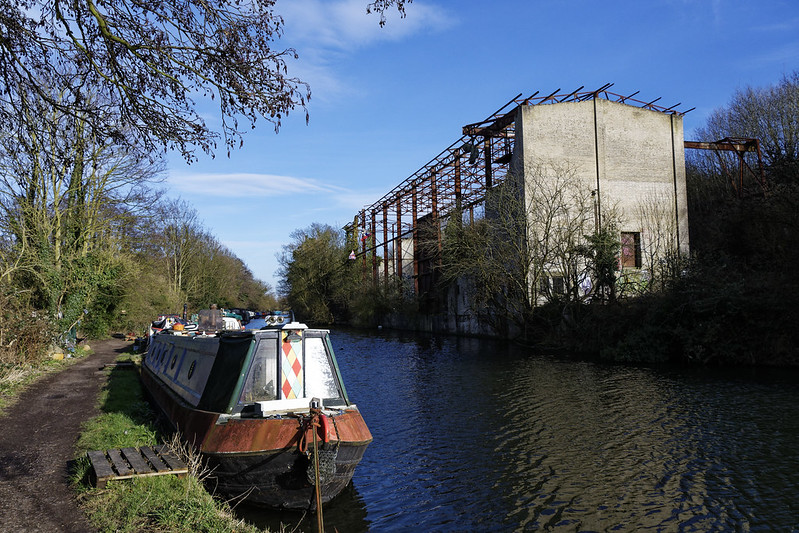 The walk was fairly varied with lots of different scenes, with churches, woods, canals, hills, and open country side. I can recommend this 35 kilometre/21 mile walk, which I accomplished in 6h20m.

I hope you enjoyed this tale of the Hillingdon Trail. You can find more photos in my Flickr set.

In my next adventure, I will make exploratory from the North Downs to the South Downs, which I'm intending to walk later this year.