The weekend after my second walk along the new section of the England Coast Path, I set off to Kent again to walk the third and last stage, from Cliffe to Grain.

I finished at the Six Bells in Cliffe in the previous section, which then stipulates that I have to travel there again to continue my walk. I took the train to Rochester where I would pick up the hourly (Saturday) bus to Cliffe. I arrived fairly early, as I did not want to miss it. At the appointed time however, there was no sign of a bus. After about 20 minutes I started looking for alternative plans to get to my walk, with as an option going to the end at Grain, and then walk back. The departures board showed that bus leaving in a few minutes. Just behind the bus to Grain, I spotted my actual bus—it was merely 25 minutes late! I am glad it did not come to me taking the bus to Grain, and then walking the route in reverse. More on that, later.

After arriving at Cliffe I walked back through the RSPB Cliffe Pools Nature Reserve to the river, to continue the England Coast Path. Although it was a little cold, the Sun was more than warm enough for me to not to have to wear a coat (yet), and I quickly stowed it away while admiring Redham Mead. 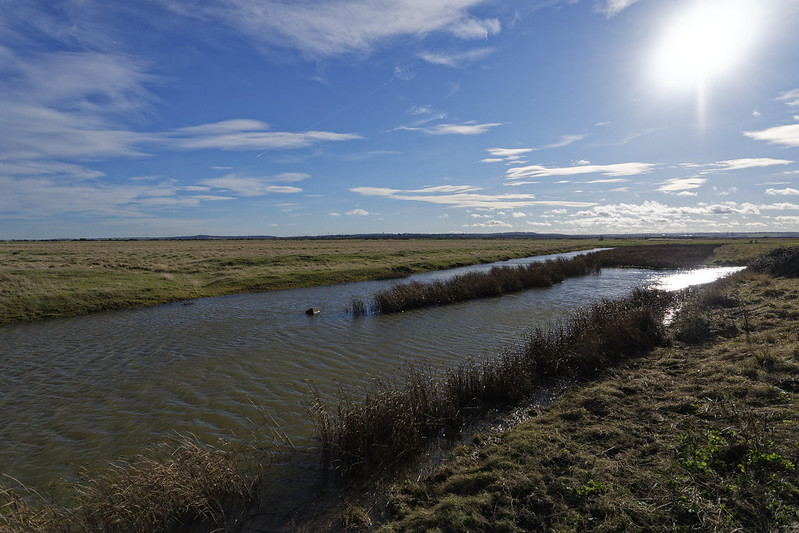 The path follows the sea wall from pretty much here all the way to the Isle of Grain, with some small detours. Looking over the seawall often showed much rubbish, washed up from either the North Sea or the Thames. It pains me to see that the river is so polluted.

On the right hand side (going East) there are the Marshes and Saltings that are so common to this part of Kent.

The dyke itself had some barbed wire, but more interestingly a bunch of hardy trees, such as this one. I am surprised it managed to go here on this windy stretch. 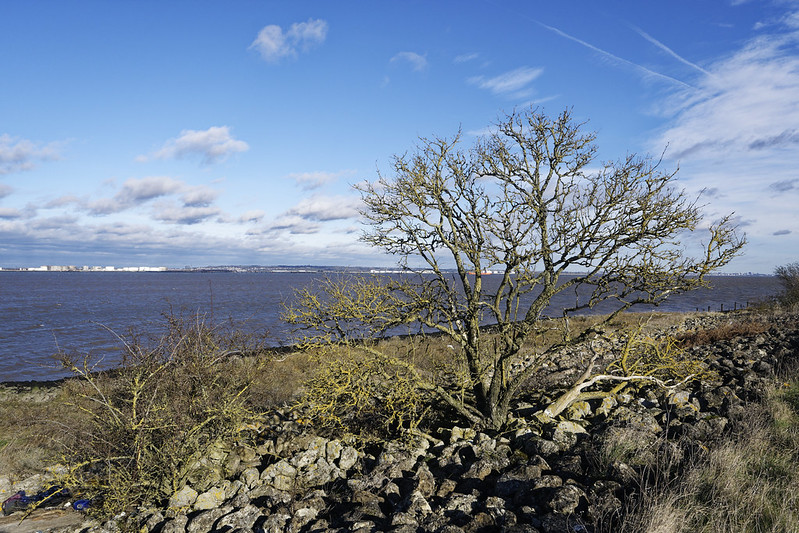 Did I say windy?

Although the day started nice and sunny, with me not needing to wear a coat, the weather steadily deteriorated. Clouds started to move in, and the wind picked up significantly. So much so that when I finally was convinced by the wind making me cold that it was time to put my coat back on again, it was akin to a gale. This was right at a point where the path was going south to north, instead of west to east. A cyclist stopped nearby and we had a bit of a chat while he was also trying to put his coat on. He held up his bike and it quite significantly got picked up by the wind too. While I had started this day's walk at Cliffe, he had started all the way at Woolwich, where I started section one of this three section route.

When I was warm and protected from the wind again, I continued towards Grain. Not much after that I met an elderly lady and her grandson, going the opposite direction—nose into the strong wind. Here I came to the conclusion that if I had not spotted the bus to Cliffe behind the one to Grain, my faith would also have been to walk the whole 30 km with the wind trying to make me fail!

By the time I arrived at Allhallows, the wind had luckily quieted down a little. 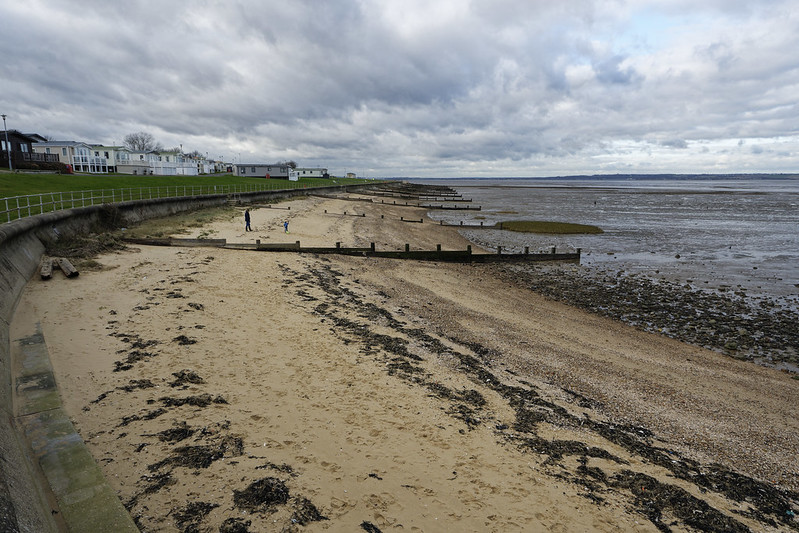 Just before Allhallows the path leaves the vicinity of the Thames for a while to skirt around the Dagnam Saltings. When it returns you end up at the Allhallows Holiday Park. I was quite surprised to find it not totally empty at this time of year.

Leaving the beach and the resort behind, the path continues along the south bank of the Yantlet Creek and around the Allhallows Marches. 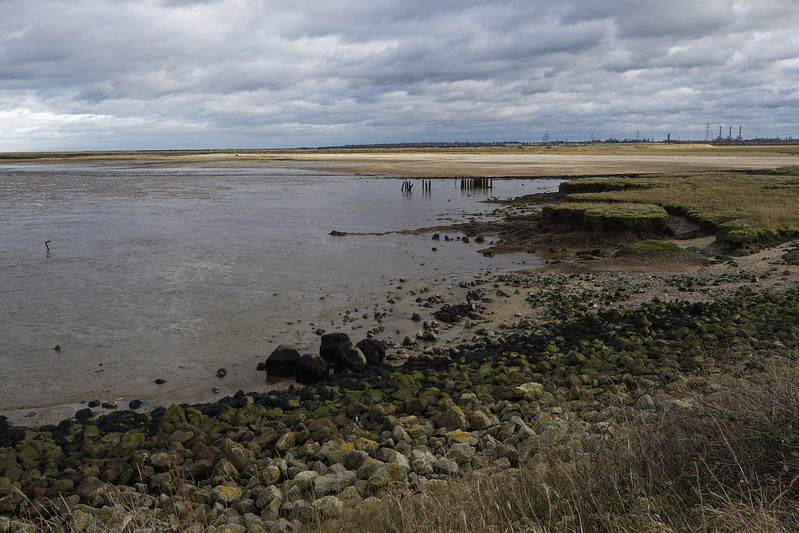 From here you get a good view of the Grain Power Station looming in the near distance.

It is currently not possible to skirt the full outline of the Isle of Grain. Perhaps in the future there will be a bridge to cross into the "North Level" of the Grain March. 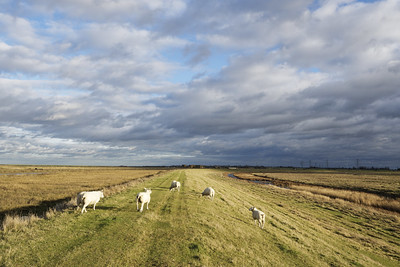 On this stretch I also encountered a flock of sheep, that needed some encouragement to move along and let me pass. At this time I was feeling like I was nearing the end of the walk. The light changed with dusk approaching. A few scattered farms can be seen across the Marshes too. 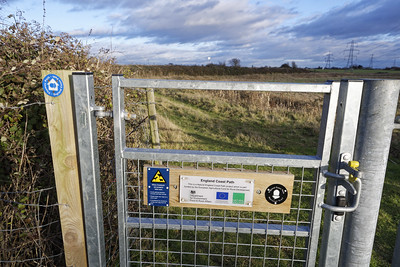 A new section of the path and a sparkly clean and new fence highlighted that part of the funding for this new section of the England Coast Path was provided by the European Agricultural Fund for Rural Development, from the European Union. It continues to amaze me how much the European Union has funded some of Britain's natural, cultural, and social projects. Let's hope that additional funding is made available to extend the England Coast Path further too.

At the end of this stretch of this new path I walked into the outskirts of Grain, a town of around 1600 people. It is not a very big town and after passing St James Church, I made it to the coast and the end of this section of the England Coast Path.

I was fairly early for my bus—I had just missed it again—so I wandered a little further along the coast before finding the bus stop. In the flats between here and Sheerness lies Grain Tower which had a brief time of operation during the World Wars, but now remains derelict. 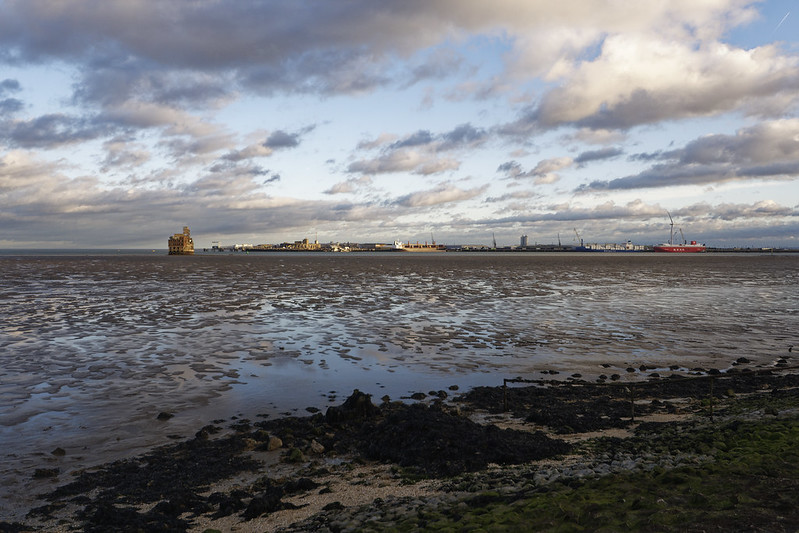 Grain Tower, with Sheerness across the Medway

I was a little sad to miss the sunset here on the flats, but I did have to make the long trip home by bus and train. I did have a little time to stand on the beach and look at the shells.

I hope you enjoyed this tale about the new section of the England Coast Path. You can find more photos in my Flickr set.

What will my next adventure be?