The weekend after my first walk along the new section of the England Coast Path, I set off to Kent again to walk the second stage, from Greenhithe to Cliffe.

The day was January 22nd, 2022. It was another overcast day and the tide was out. 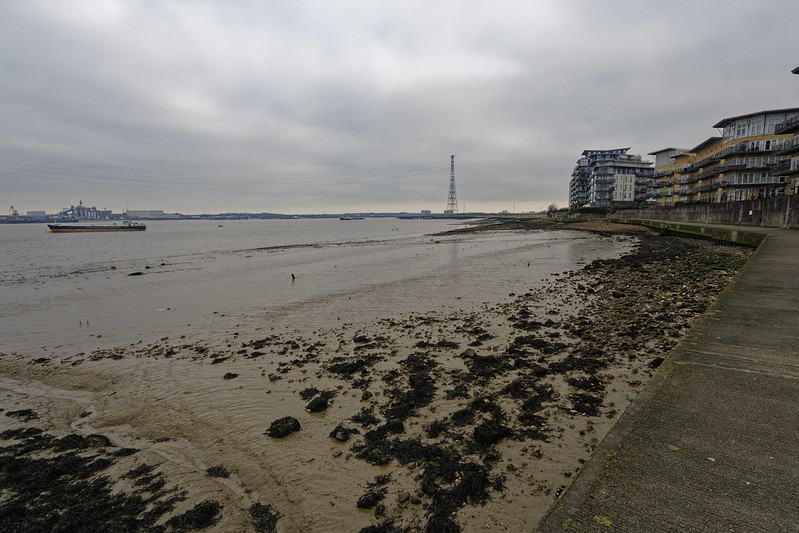 As it was reasonably early, there were not a lot of people about yet, and I had the path mostly to myself. In the distance I saw a massive electricity pylon, which I ended up walking straight underneath, although that wouldn't be for another 20 minutes.

First I peaked through a whole in the whole, neatly outlining the Ingress Abbey at Greenhithe, a building and site with a rich history.

From Greenhithe the path leads North East for a while to round the Broadness Salt March, before turning near South where you have to divert from the river Thames to go around concrete factories and aggregate terminals.

I walked past the Ebbsfleet United football grounds and then headed for the river again. Here was the first diversion of the signed route. Instead of going along public footpaths, the ECP path was directed around the North side of a building-clearance site. I was very much told to keep out of the restricted area. 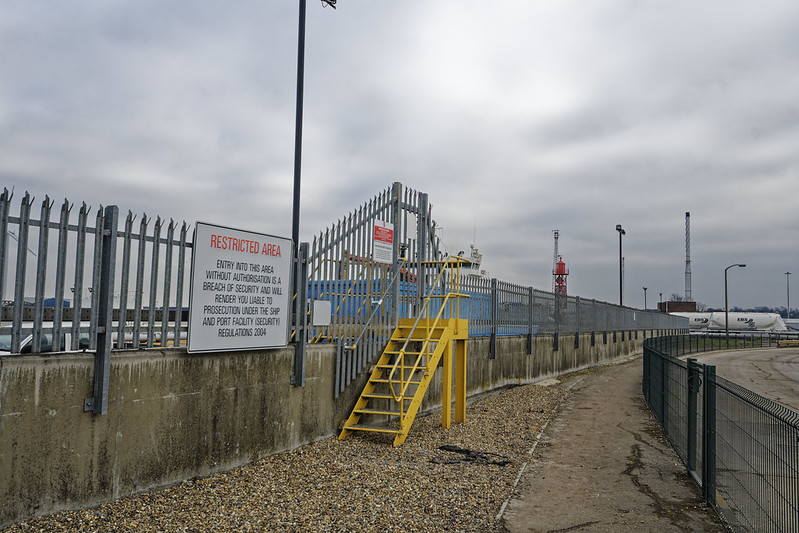 When leaving the building site there was a large queue of HGVs near Lidl's Distribution Warehouse, seemingly not having anything to do at the moment with regards to moving goods around. Soon after that there was another diversion around a building site, where Gravesend is creating a new neighbourhood near Rosherville. This diversion was up quite a steep hill, but and there were many steps to climb, over a hundred.

After having returned to the Thames by going down the hill, I started to approach Gravesend, where the bright orange LV21 could hardly be missed. On the East side of Gravesend there are the Gorden Gardens, with loads of people about enjoying the river side. 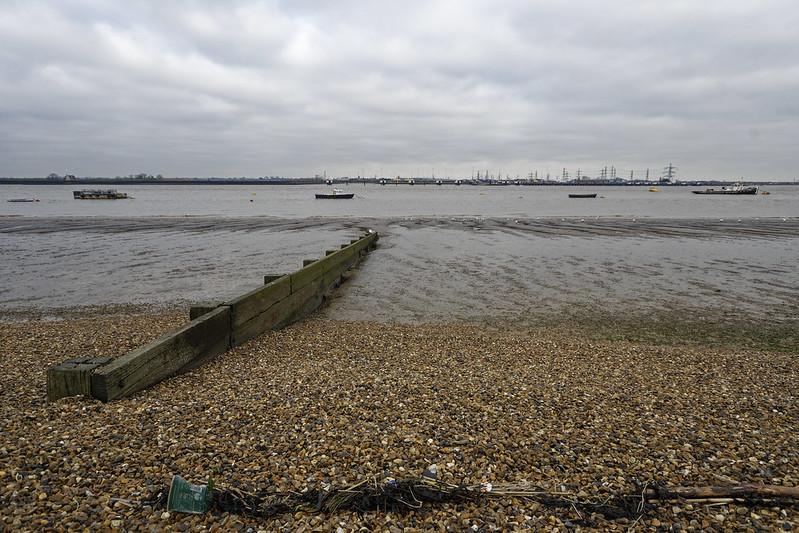 Progressing East again from the Gardens there was another diversion. Instead of going through an industrial estate, I had to skirt it on its South side to avoid some leaking tires. I don't know what would have been nicer to walk through, as the "detour" was not great, with inadequate footpaths, but when I peeked through the estate it did look to nice either.

What was however interesting to see was the begininning (or end) of the now disused Thames and Medway Canal.

Having returned back to the river, I looked West to see one of the many jetties that lines this part of the river Thames. 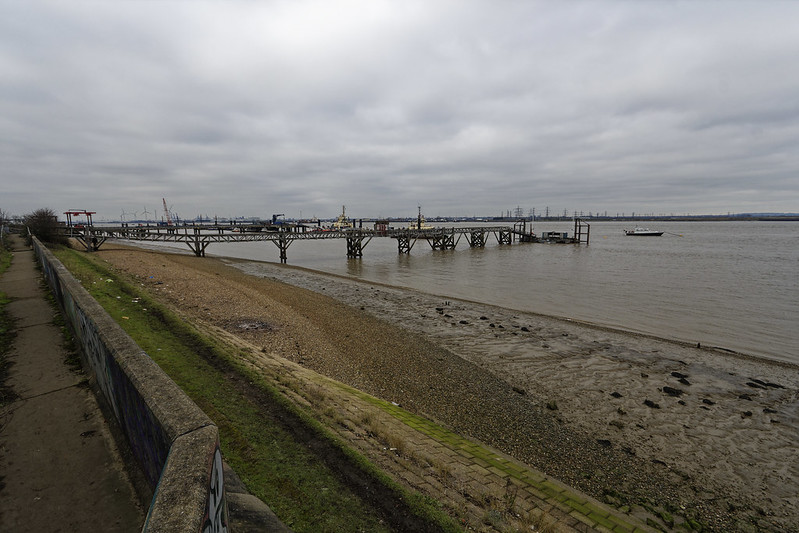 The last section of the walk, after having left industrious Gravesend, became quiet and a lot more deserted. I started to enjoy the walk more now. Although perhaps not as interestingly busy as the first part, I like walking to get out from behind my computer and clear my head. Industrial estate and town centres do not really help with that much. 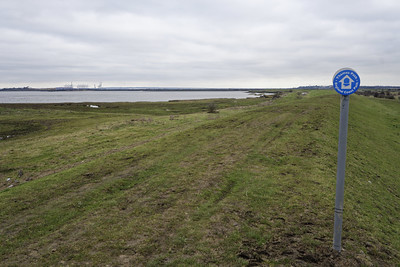 Occasionally there were way pointers, although I don't quite know which other way the path could have gone!

It is quite exposed on the dike, and I was happy that I had enclosed myself in a warm and windproof coat. Although grey, there was no rain.

The Shorne and Higham marshes on the right hand side of the dike (i.e., the dry side) are a Site of Specific Scientific Interest. They have a fairly stable water level, and are apparently an important habitat for water voles.

Before turning North at the East end of the Higham Marshes, the England Coast Path makes an "interesting" detour with a go-back-on-yourself loop. I don't quite understand why, as the informal Hoo Peninsula Path (HPP on the map) does not bother with this.

Although I can see why the route is set out this way—there is a possibility of a stream—I also think that the England Coast Path should include this loop, as that possibility is also still there at this Southern most point. The path in the loop itself was also not easy to see, with lots of narrow and very muddy trails, where the route that the Hoo Peninsula Path takes seemed much easier going. Perhaps they'll re-adjust this in the future.

Having walked this somewhat odd loop, the path continues North with the Higham Saltings on the left, and the Alpha Pool on the right. 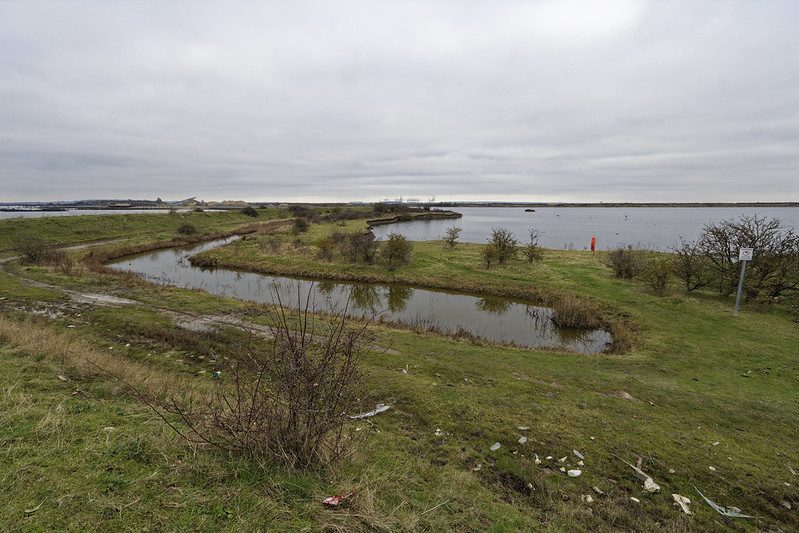 I finished my near at Cliffe Fort, a disused artillery fort built in the 1860s. I could not actually see much of it from the ECP, as it was mostly obstructed by machinery as part of a large aggregate processing operation. The parts of it that I did see looked in disrepair.

Another interesting thing here is a Brennan torpedo launch slipway. This torpedo is often claimed to be the first guided missile, although that is untrue.

From the end of the walk along the Thames, I walked into Cliffe to catch the bus to Rochester to take the train back into London. The bus only runs once an hour on Saturday (and less frequent on Sunday), and of course I ended up missing it by a few minutes.

This turned out not to be much of a disaster though, as the bus stop is both the start of its route, and named "The Six Bells". A pub of the same name is right next to it! I enjoyed a pint while waiting for the bus when a few more walkers showed up. They were walking the Saxon Shore Way. Perhaps I walk that at some point in the future.