As I have mentioned in earlier posts, I would like to walk the South Downs Way this year. I consider it still a little bit too early in the year and therefore I have been ticking off lots of other walks a little bit closer to home.

To get to the start of the Downs Link I started at Guildford, which is easy enough to get to by train from London. From the station I climbed Pewley Hill and used The Mile path to get to the North Downs Way. 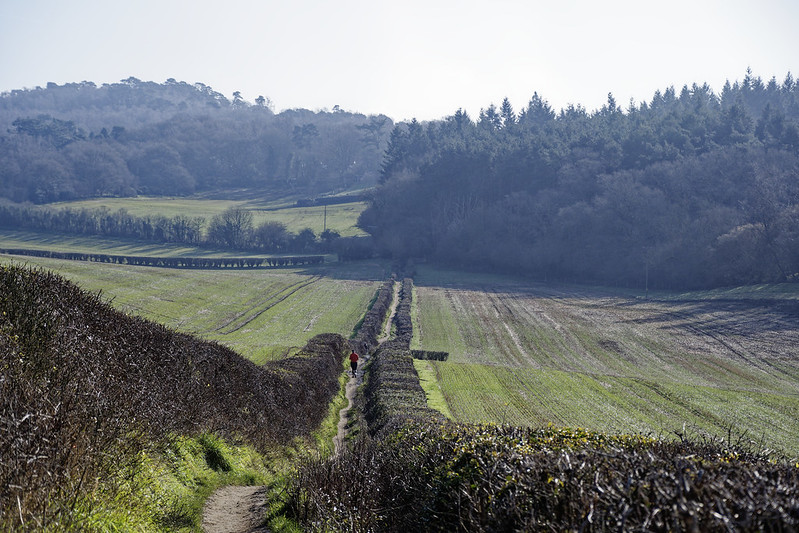 A little further to the east of St. Martha's Hill and its church, the Downs Link then starts going south. The route starts off quite steep going down through narrow and muddy paths before it goes west to join the route of the dysfunctional Wey and Arun canal which it follows for a little while. There is another walking route, the Wey-South Path which mostly follows the whole length of that canal, which also has some conversation work to restore it to a working navigational route again.

However, the Downs Link does not follow the canal for very long, and instead mostly follows the path of an two old railway lines: The Cranleigh Line and Steyning line. Both were closed as part of the Beeching Axe. Because it follows these old railway lines, the way is often flat and very straight. I walked the route in spring, and the leaves were starting to grow and the grass trying to push through in many places.

In my first section, from south of Guildford to Christ's Hospital it follows the old railway nearly perfectly. There were few walkers around, and the hills around it were dotted with churches and chapels. The occasional old station hinting at that the route really was an old railway. 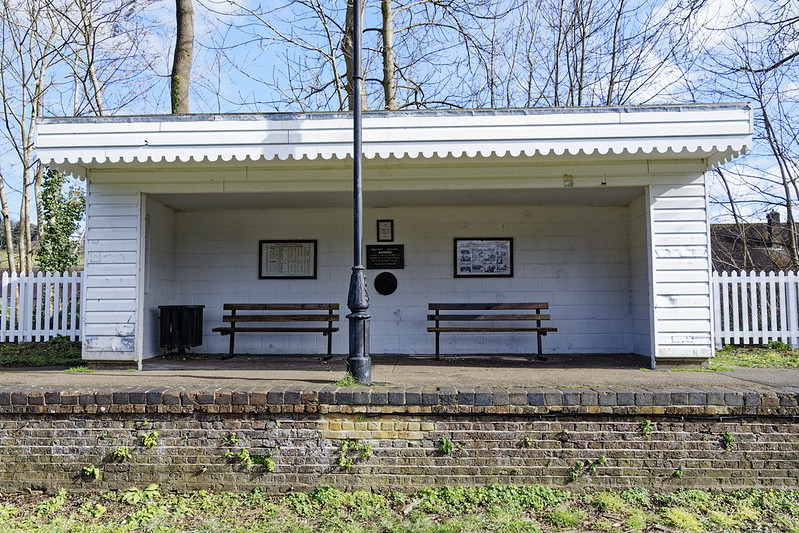 In some places the path was fairly muddy and some sections still had fallen trees laid across the track. I had to do some climbing to get over them, but at least that was a lot easier for me to do than the occasional cyclist. NCN 222 does share quite a bit with the Downs Link. 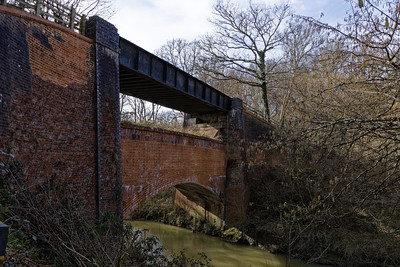 South of Rudgwick the South Downs Way crosses the A281, a very busy road which was hard to cross. I was therefore not surprised to see that there is a campaign to reinstate the bridge that was demolished in the 60s.

Talking about bridge, the logo used on way markers is a peculiar looking bridge, the Tier Bridge. It has a small view point to get a better photo of it, but I think it could have been put a little bit further away still.

From here on, the scenery beyond the trees that surrounded the route became more open, with fields and farms. After a while I spotted a tower in the distance, which turned out to be a tower attached to Christ's Hospital school. This is also the location where the first old railway joined a still working one, with a handy station nearby, aptly named, Christ's Hospital.

An hourly train from here brought be back to London Victoria and homewards. 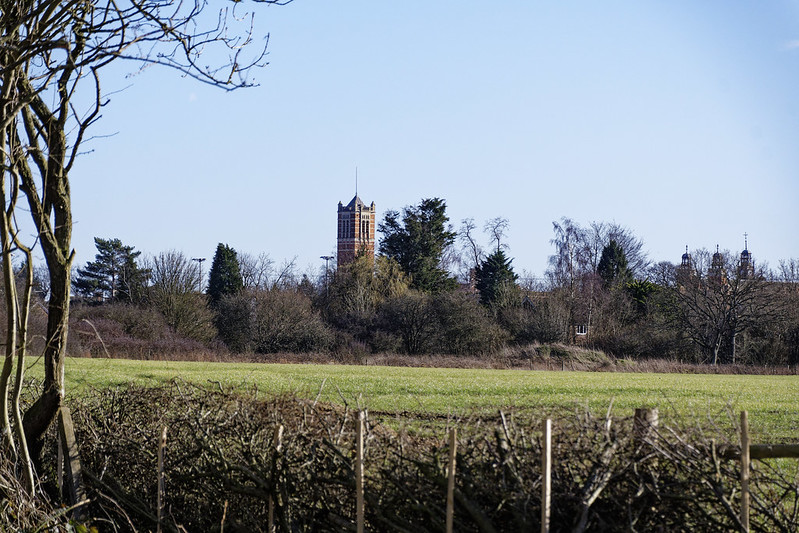 Two weeks later, it was time to walk the final part of the Downs Link, starting where I left off and finishing at Shoreham-by-Sea. The weather was just as good, if not better, than during the first section.

The paths on the southern section of the Link were generally better maintained with lots of gravel, stones, and very little mud. It was also most certainly a lot busier with walkers and runners, especially near the larger town of Southwater.

This section follows the route of the old Steyning line from Christ's Hospital to Shoreham-on-Sea.

The trees were a little bit greener than two weeks earlier and again I passed many old demolished stations. The one at West Grinstead had an old railway carriage, also acting as an information point for the Downs Link itself. 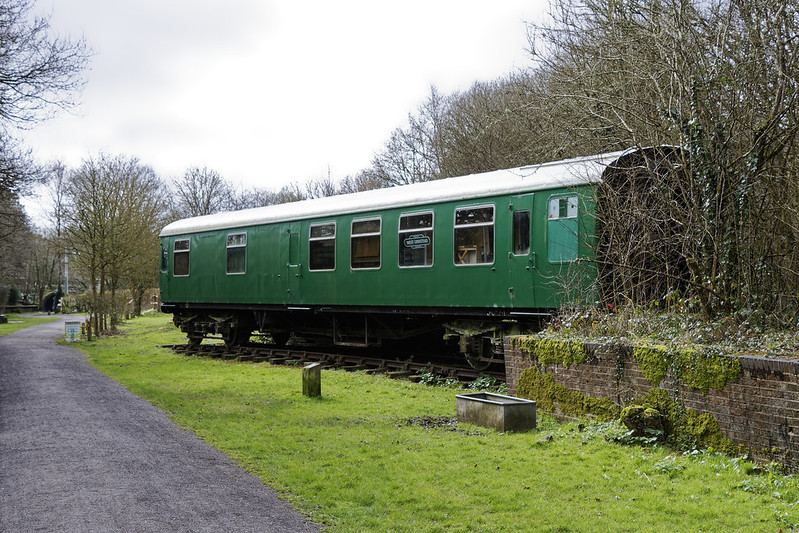 The scenery was generally flatter and wider, with even more fields and animal husbandry than in the northern section. I saw alpacas, where very definitely looked out of place, for example. There were also more streams and brooks to cross, and the river Adur showed up a few times in the earlier part of the walk as well. 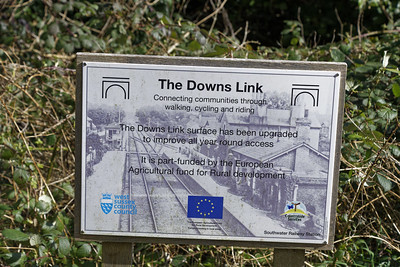 At Partridge Green, the route slightly deviated from the original track bed, and was redirected along a not too busy road. The original route was obstructed by a new trading estate. Luckily the road walking did not take me very long.

Near Henfield I spotted a sign talking about the upgrade to the Downs Link, and just like the England Coast Path, it was apparently part-funded by the European Union Agricultural fund. The path itself was almost never muddy, which made it a lot easier to walk on.

Near Steyning the South Downs themself started to appear larger and larger on the horizon and the path once again deviated from the original railway. From here on towards the end there was very little to see of it, and instead the Downs Link started following the river Adur into Shoreham-on-Sea.

Just south of Bramber, I diligently followed the signs for the Downs Link, realising after only a few minutes that it sent me on a stupid 1 kilometre detour, where I instead just simply could have crossed the moderately busy road. I should have followed the route that my watch indicated, which was sourced from the excellent Waymarked Trails website, using OpenStreetMap data.

Not long after the unnecessary detour the Downs Link meets the South Downs Way and they share the route for a little while until the river Adur. The old cement works are clearly visible up against the easterly hills. 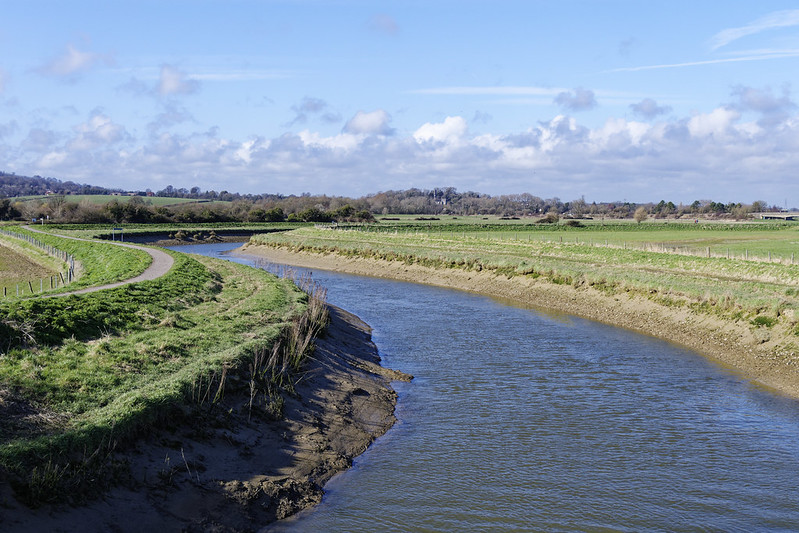 Having passed the cement works the route takes you down the Adur towards the finish. Across the river the chapel of Lancing College is hard to miss on the hill, especially with the sun getting lower and creating some great shadows on the building. Not much after that you pass the Old Toll Bridge, the last of its kind in the world, from where you can see the chapel on the hill as well. 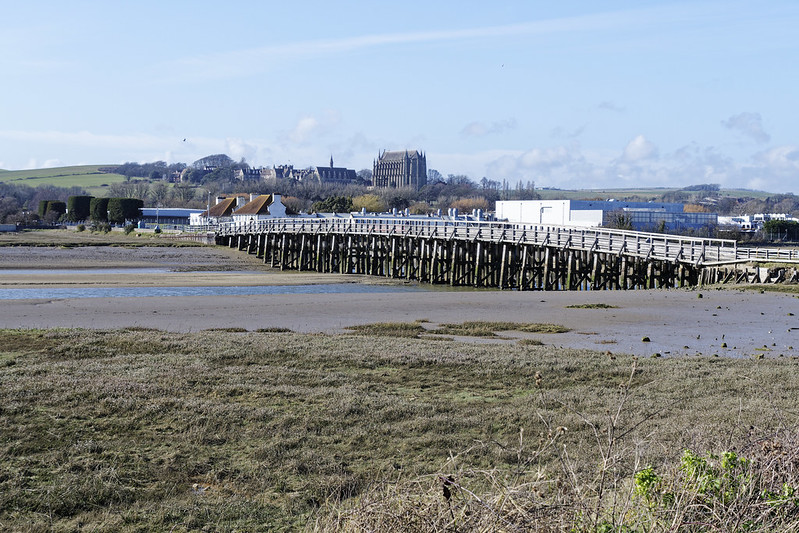 My walk finished at the new railway bridge carrying the West Coastway Line. I did consider continuing along the shore to Brighton, but I after 32 kilometres, doing another 10 seems a little bit over the top!

I hope you enjoyed this tale of the Downs Link. You can find more photos in my Flickr set.