The Workshop: Ansible in Practice

This month, we're going to dive into a practical application of Ansible by building a playbook with roles to implement a fully functional Linux, MySQL, PHP, and NGINX web server. By the end, you should be able to take the playbook we build together and extend it to suit your requirements.

To follow along or review any parts of the playbook we're building, you can clone the repository.

Last month in "The Workshop: System Management With Ansible,"---see Related Reading---we covered the basics of running Ansible on our machines (control nodes) to configure remote systems (managed nodes). We covered inventory files to describe our managed nodes and how we can group tasks into roles and then into larger playbooks to apply our desired state of the remote systems. We built our first playbook to bring the Ansible basic concepts together in an easy to understand example.

Setting up a managed node

Recall that a managed node is a remote system we configure with Ansible. For this project, we're going to use a local Ubuntu 18.04 server via Vagrant. If you prefer to use a cloud-hosted system, feel free to use your host's IP in place of the IP we use for our Vagrant virtual machine. If you want to use the included Vagrant machine, you'll need Virtualbox 6.x installed as well as Vagrant 2.x.

To start up our managed node run vagrant up from the root of our repository. You may need to select a network device to use for the virtual machine; to ensure we have internet connectivity, you'll want to select whichever device is your primary internet connection. My MacBook Pro system has several network devices, but since I'm connected to my home network via WiFi, I'll select en0: Wi-Fi (AirPort) to use and the virtual machine will share this device with my Mac and appear on my network as it's own system. We need to find out the IP address our network assigned the Vagrant machine by running vagrant ssh to SSH into the VM, then run ifconfig and look for a device named eth1 which reports 192.168.1.135 on my network. This is the IP we'll use in our inventory file in our Ansible playbook.

We need to specify our managed node in our inventory file located at ansible/inventory/local.ini in our project. We'll keep it simple for now with the following contents:

Make sure you update the ansible_host value to the IP of your managed node, or else Ansible will be unable to connect and show your host as unreachable when attempting to run the playbook.

Last month, we created a basic playbook and a user-accounts role to create a user to run our application. We're going to reuse the playbook and role as our starting point. Our playbook is located at ansible/server-setup.yml. We'll add our role and start a new role named common, which is where I typically do initial system customization, such as allowing/disallowing ports in the firewall and installing any base packages I expect we'll need.

Our common role starts quite basic, and we'll expand upon it as we need; for now, we're listing out several packages we want to ensure are installed in the managed node.

Our ansible/roles/common/tasks/main.yml file makes use of apt and pkg modules to loop over a list of packages to pass to the apt module in Ansible to install packages. This is the preferred way to declare packages to be installed, so the system will execute fewer calls to the package manager, which results in a faster run time of our playbook.

To ensure a list of packages is not installed, you can take the same code block and change state=present to state=absent to have the Apt package manager remove the listed packages when the playbook is executed.

The next section named "Allow connections through the firewall," tells the UFW firewall we just installed to open ports 80 and 443 to TCP traffic so users can access our web server.

In this case, I left out SSH since we aren't doing any configuration on the service. You don't have to include port 22; UFW doesn't allow this to lock yourself out as is. The best practice would be to put port 22 on this list explicitly.

To install and configure PHP, there are a few steps we'll take:

Our php role file structure is shown in Figure 1.

Our ansible/roles/php/tasks/main.yml begins with adding the ondrej/php Apt archive for us to install PHP from. This allows us to use the most recent version of PHP. Then, we'll install PHP packages and include tasks to configure our php.ini files and our extensions.

To update the existing php.ini files, we'll use the lineinfile ansible module. This module allows us to search a specified file for a regular expression pattern and substitute the found line with our own. We'll use this to set various options such as error_reporting, memory_limit, and more:

While it makes sense in our php.ini for us to search and replace, it may not always make sense. Consider the case as setting up PHP extensions, which may not have existing files such as the case for OPcache and Xdebug extensions. We can use Ansible's template module to render these files on the managed node from Jinja2 template files in our role:

You may prefer not to edit the stock PHP INI files. On most distributions, you can drop custom INI files to a folder, and PHP will load them. Name it something like 999-local.ini to ensure it loads last and overrides previously set values. To figure out the path, look at the output of phpinfo() for "Scan this dir for additional .ini files." In Ubuntu, the directory should be something like /etc/php/7.4/conf.d.

Our template file ansible/roles/php/templates/xdebug.ini.j2 doesn't utilize any variables so the j2 extension is optional. However, I prefer to treat all files in the templates/ folder as if they could contain variables, so I keep the extension as it is, with the following contents:

This file is rendered as we see it above, into the destination on the managed node located at /etc/php/7.4/mods-available/xdebug.ini.

Compared to our php, the role to install and configure the NGINX web server is much simpler: 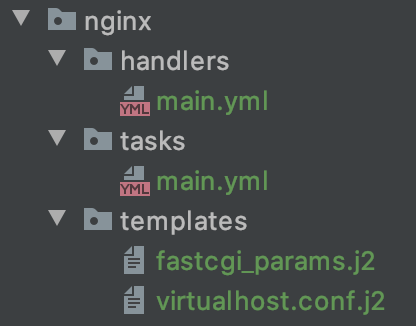 With only a handful of tasks, it makes sense to keep everything in the same ansible/roles/nginx/tasks/main.yml file. The steps we need to take are to:

Here is an abbreviated content of the nginx role's tasks/main.yml:

We use two new modules here to add a database user mysql_user and mysql_db to create a database for our application. We're using the same value for our username as our password, which isn’t a good practice at all. For keeping your secrets out of version control, we’ll cover Python environments as well as briefly mention two other options.

Now we're ready to run our playbook against our managed node. Once you have run vagrant up from the root of the project, you can run the following command to apply the playbook to the Vagrant virtual machine.

An example of the output you should see is below in Figure 3: 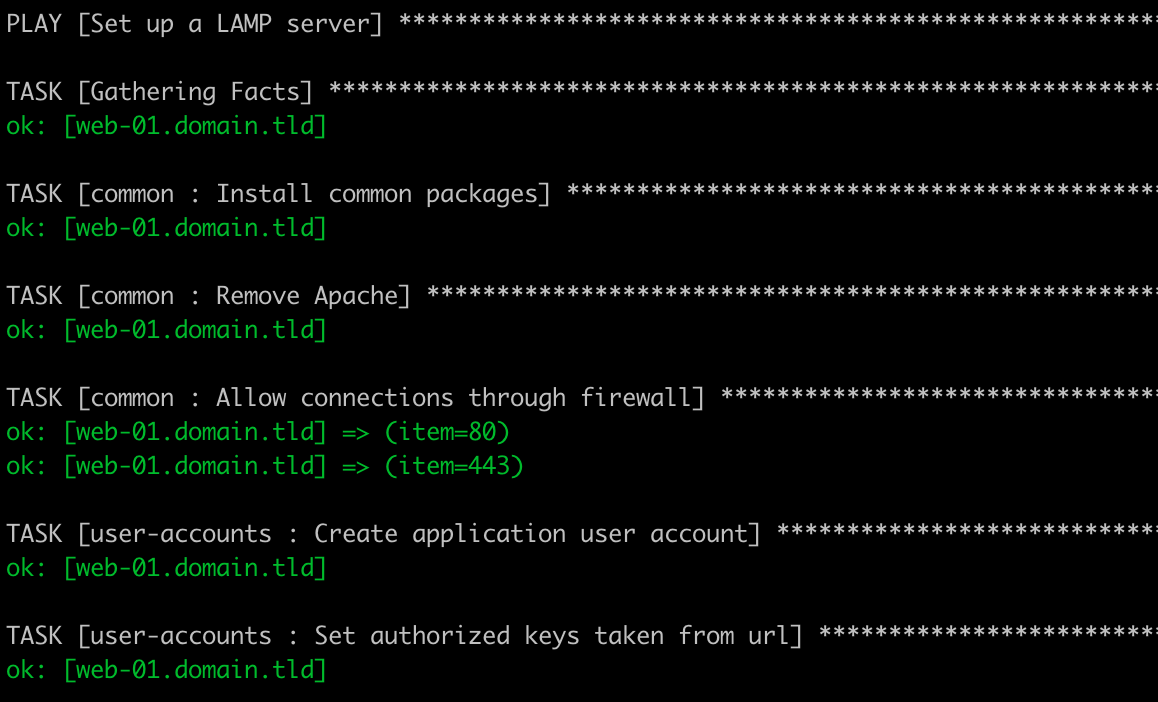 If you’re interested in the full log output, you can view the playbook-output.log included in the project for the full output of the playbook command.

Keeping Your Secrets out of Version Control With Virtual Environments

“Snakes. Why did it have to be snakes?”

In the 1981 theatrical masterpiece "Raiders of the Lost Ark" our hero, Indiana Jones, played by Harrison Ford, prepares to enter a freshly discovered archaeological dig site by dropping a lit torch to the bottom of the pit to see how deep it is. When the torch hits the ground, we see the ground is covered in snakes. "Asps, very dangerous," as we find out right before our hero repels down into the pit. I mention snakes not only because Ansible is written in Python, but keeping your secrets in your version control system is as dangerous as asps. We’ll use virtualenv, a package that lends itself very well to keep your secrets out of your source control repository.

Don't worry, if you hate Python, we're not diving too deep. We're going to do just enough to set up our virtual environment so we can safely keep our secrets out of our playbook. Python virtual environments are very similar to what PHP developers would think about as the .env file in their project where environment variables are declared. If this file were combined with the vendor folder, this would be the same as what Python virtualenv provides.

You may already have Python 3 on your system. Most likely, you have Python 2.7, which is the equivalent faux pas of running PHP 5.4. You can install Python 3 easily via the official downloads. Once installed, you should be able to run which pip3 and see a path to the pip3 executable (for me pip3 is located at /usr/bin/pip3). This is the Python package manager application similar to Composer.

Before we can create a virtual environment, we need to use Pip to install the virtualenv package via:

It may be necessary for you to run sudo to install virtualenv, which is acceptable. The next step is to find out where our python3 executable is located: which python3; on macOS, the file is /usr/local/bin/python3. Take a note of this path and use it from the root of our GitHub project you cloned earlier to run the following command.

The first command we ran told our specific version of python3 to create a new virtualenv in a folder named env which now exists in the repository we cloned. The next step is to "activate" the environment we just created. We can verify we're now using Python from our virtual environment by running which python; we can see the Python executable is now located in our env/bin folder. To verify our version is what we expect, we run python —version to see we're running 3.6.8.

Instead of composer.json, Python uses requirements.txt as its source of dependencies for a project, which can be installed by running pip install -r requirements.txt. Once complete, we can breathe a sigh of relief as we're done with Python! We now have access to the ansible executable from within our virtual environment: env/bin/ansible.

All of this virtual environment configuration and set up now allows us to source variables from the environment into our Ansible tasks. This is especially useful for secrets such as passwords, API keys, tokens, and anything else which shouldn't be shared in version control. We can simply add these values to our env/bin/activate script:

If storing sensitive information in environment variables is completely absurd to you, check out Ansible Vault which changes how you edit encrypted files, via the ansible-vault CLI, which encrypts your secrets in a file and is sourced by Ansible. You could also leverage git-crypt to keep your secrets encrypted at rest in your version control system and decrypt them on your local system.

Go Forth and Configure!

Now that we’ve stepped through a real-world playbook to configure a Linux system into a PHP application server, you’re ready to take the next step in your Ansible learning journey and start building playbooks. Feel free to copy and tweak the examples here. You can find the complete playbook on GitHub. Happy Configuring!