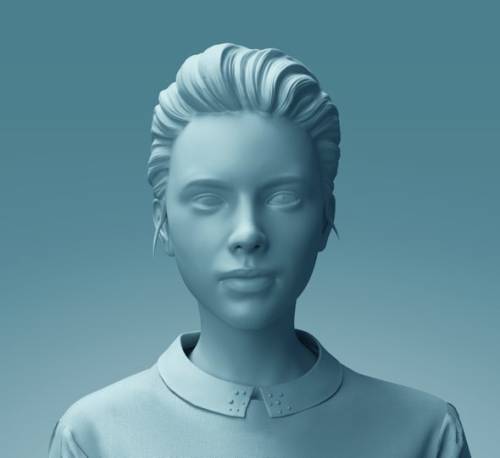 The technological white supremacy extends to human hair, where the term “hair” has become shorthand for the visual features that dominate white people’s hair. The standard model for rendering hair, the “Marschner” model, was custom-designed to capture the subtle glints that appear when light interacts with the micro-structures in flat, straight hair. No equivalent micro-structural model has ever been developed for kinky, Afro-textured hair. In practice, the straight-hair model just gets applied as a good-enough hand-me-down.

Similarly, algorithms for simulating the motion of hair assume that it is composed of straight or wavy fibers locally sliding over each other. This assumption does not hold for kinky hair, where each follicle is in persistent collision with a global range of follicles all over the scalp. Over the last two decades, I have never seen an algorithm developed to handle this case.

This racist state of technology was not inevitable. The 2001 space-opera flop Final Fantasy: The Spirits Within was released before the dipole approximation was available. The main character, Dr. Aki Ross, is a young, fair-skinned scientist of ambiguous ethnicity, and much of the movie’s failure was placed on her distressingly hard and plasticine-looking skin. Less often mentioned was the fact that two other characters in the movie, the Black space marine Ryan Whittaker and the elderly Dr. Sid, looked much more realistic than Aki Ross. Blacker and older skin does not require as much translucency to appear lifelike. If the filmmakers had aligned their art with the limitations of the technology, Aki Ross should have been modeled after a latter-day Eartha Kitt.

For a brief moment in the 2000s, the shortest scientific path to achieving realistic digital humans was to refine the depiction of computer-generated Blackness in film, not to double down on algorithmic whiteness. Imagine the timeline that could have been. Instead of two more decades of computer-animated whiteness, a generation of moviegoers could have seen their own humanity radiating from Black heroes. That alternate timeline is gone; we live in this one instead.