How to lose me as a customer

I have been subjecting my twitter followers to some rather cryptic ranting about DigitalOcean (DO) lately. I’ve been a DO customer since February 2016 when I moved from Linode to DO. I don’t do a lot with my virtual private servers (VPS). I host about 15 WordPress installations for various projects (Mostly family and friends sites). I run several command line applications that eat up a chunk of CPU So I’ve always known that shared hosting wasn’t for me and I need at least a VPS to be happy. This also serves as my own personal playground. I’m not a big deal to DO because I spend ~$50 a month. My contribution to them is very small in the grand scheme of things.

As you probably already know DO makes it very easy to spin up servers and until recently I’ve never had a day’s trouble from them. This came to a screeching halt when I actually needed the support team to reply to me about a concerning email I received. 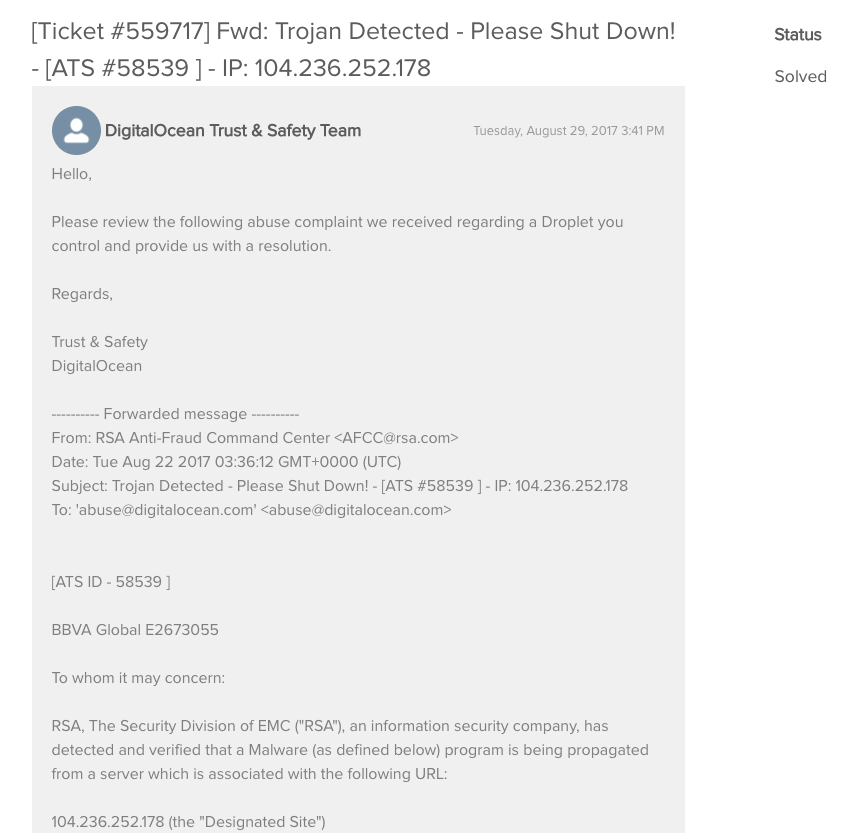 I didn’t see the email until September 4th, when DO shut down my Droplet with no warning or support ticket. The reason I didn’t see the email until September 4th was because it was marked as spam in Gmail, with a warning that “emails like this have been used in phishing attempts”. After checking headers and verifying the email was legit, I removed the email and whitelisted the source in my Gmail settings. I immediately opened a new ticket with DO support asking why my droplet was shut down and locked without any notice or support ticket. 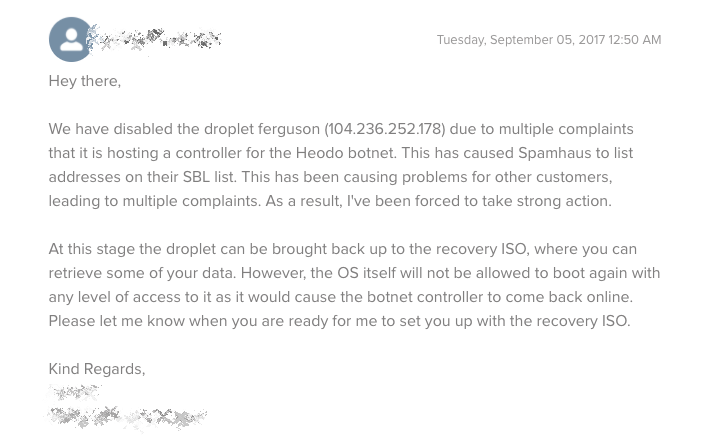 I immediately responded to the ticket saying “yes mount the ISO”, then later after I recovered from a 7 day old backup, I said screw it and told them to destroy the droplet:

FIVE DAYS LATER including asking them via Twitter why there was no response, they replied: 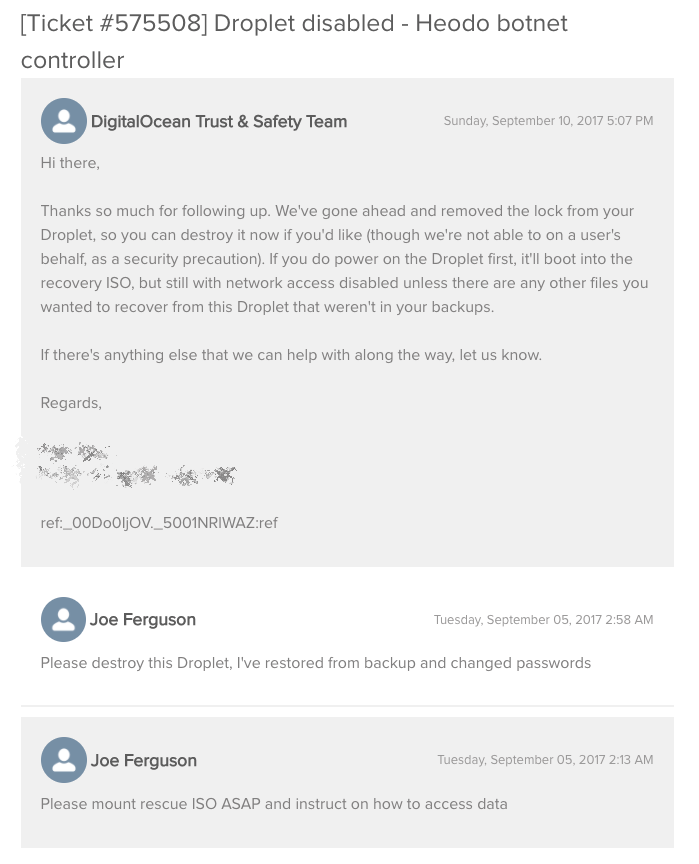 It took support FIVE DAYS to unlock my droplet. If I did not subscribe to their backup service I would have been completely down and unable to access my data from September 4th to September 10th. Around 6 days with no communication or response from DO. 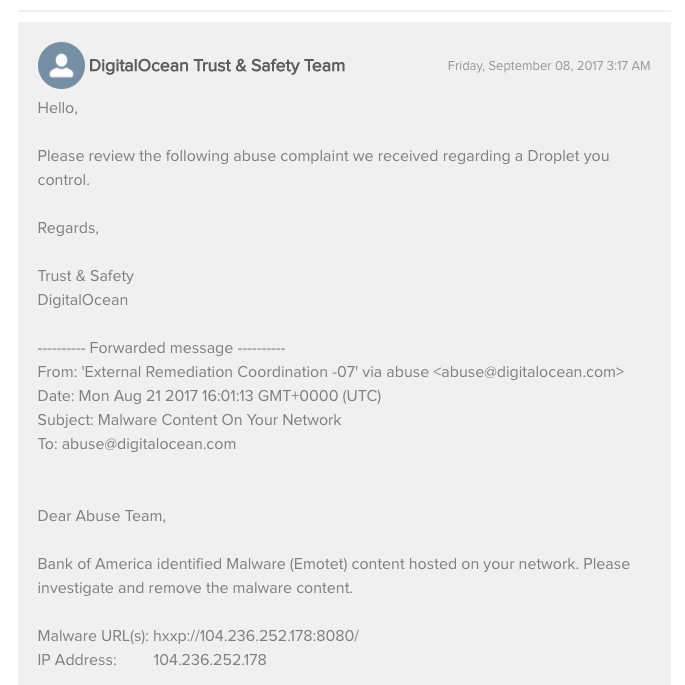 Apparently the droplet they locked is still serving malware? I replied and let my frustrations show: 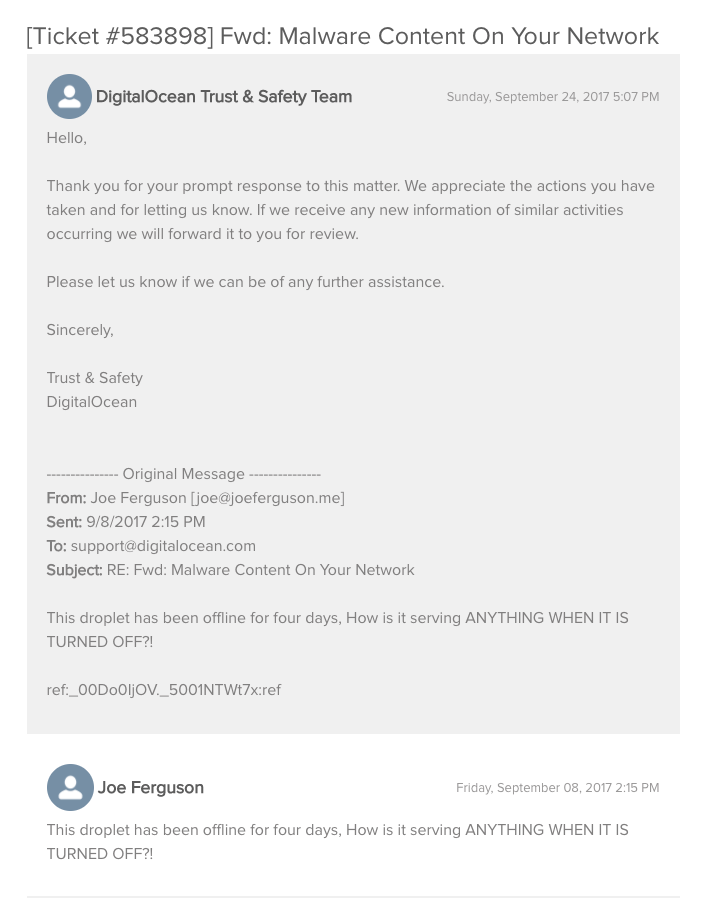 They thanked me for a prompt response and appreciate my actions. I would have appreciated the hell out of them unlocking my droplet instead of waiting another TWO DAYS. 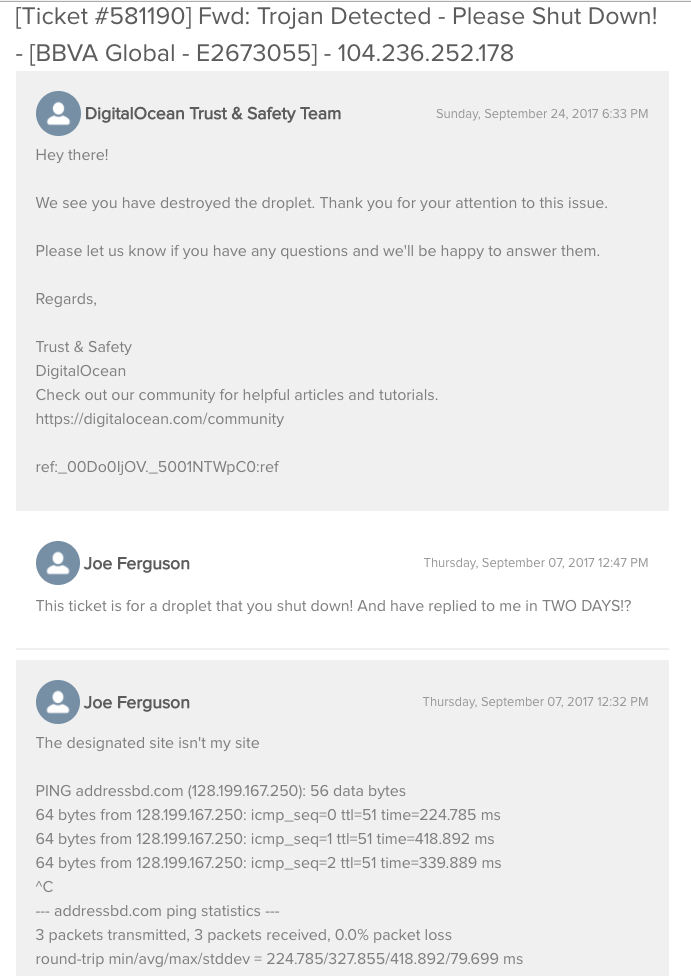 You can tell by my lack of grammar I was furious beyond words.They FINALLY replied to this ticket 17 days later. After once again being badgered via social media.

So we’re 18 or so days after this whole scenario and I have lost 100% of my faith in DO’s support. I never did spin up my droplet after they unlocked it. I should have mounted the filesystem and done some forensics to see what happened. What I can tell you is that I restored immediately from a 7 day old backup and reset ALL the passwords and did all the package updates and all of the WordPress related updates. (I was already running WP updates every 24 hours as it was). I’m willing to concede I likely had a weak root password because when i went back to check what it was, (In LastPass) it was only 6 characters and it was dictionary based. That’s completely my fault and where I assume the original issue originated. I’ve scanned and locked down the new droplet and have not had any issues or alerts since.

Digital Ocean was quick to respond via social media but it never had a real impact. I was just sent canned responses.

Secure your shit. Remember “The only truly secure system is one that is powered off, cast in a block of concrete and sealed in a lead-lined room with armed guards -- and even then I have my doubts.”

DigitalOcean had many chances to make this right but no one I interacted with cared or was empowered to. I would have been happy with an apology and some reassuring words that it wouldn’t happen again. Like I mentioned earlier I’m nothing to their bottom line. How your company treats the little customer is everything I need to know about your company as a whole. I really want to like DO. I hope this was a perfect storm of customer service failure. I won’t be recommending them to anyone anytime soon.